You can solve a moving problem with the Globe Wernicke Book Cases, item 54. They are completely portable and can be added to in sections. Things to consider as you collect and prepare your move are..

1) Original labels: These are in the middle at the back of each individual glass front bookcase section, and can be seen by looking in the bookcase.  Labels can also be useful for dating the units. The labels are made of paper and glued to the lower inside center of the backs of the bookcase units and attached to the bottom or top (non-exposed) surfaces of the top and base sections. Ours has two of the older paper labels. They tell the story. Proudly manufactured in Cincinnati, Ohio.


2) Metal side bands: are there and are original.
3) Finish: ours has the original finish, it has not been painted or refinished.
4) Original wavy glass: Old bookcases like these have the older glass in it. You can see the ripples or waves by standing to the side of the glass pane.
5) The history: Ours has been treasured for years. It has five “Elastic” sectioned Cases with the roller bearing glass fronts, the original top and base!
The bookcases produced by Globe-Wernicke and others, are sometimes called “Barrister” Bookcases because of their popularity with lawyers. 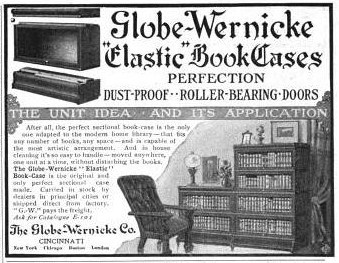 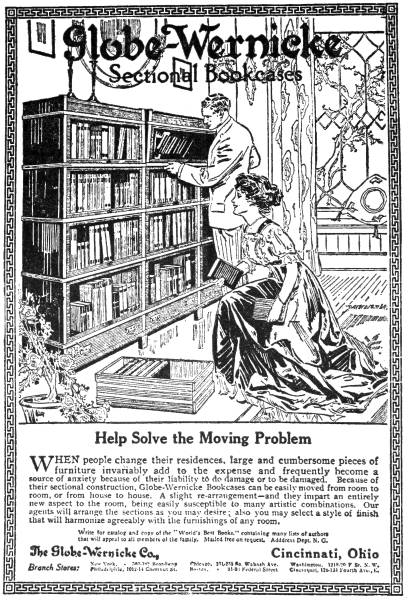 However, the preferred term used by this Company was “Elastic” Book Cases and later “Sectional” Book Cases. The reason was to call attention to the flexible nature of the bookcases, homeowners could purchase a small bookcase set, and then at a later time, purchase additional sections to expand the case as their libraries grew. No sense having your books move all over the place.

The Globe-Wernicke Company was formed in 1899 when the Cincinnati based Globe Files Co., founded in 1882, purchasing the Minneapolis based Wernicke Co., founded in 1893 by Otto Wernicke. The company was best known for their high end bookcases, desks, and other office furniture. Globe-Wernicke went on to established factories in the United States, Canada, United Kingdom, France and Germany. In World War II, ninety percent of it’s production went to the war efforts. In September 1955, the company was purchased by the City Auto Stamping Company in Toledo, Ohio. In 1963, Globe-Wernicke acquired the Weis Manufacturing Company, and changed the company name to Globe-Weis Systems Company. In 2000, Globe-Weis and four other brands merged to form Cardinal Brands Inc. of Lawrence, Kansas.
They can help if you have a move.. So can AYPToday!


What can we say about most successful pop group of the 20 century? They changed popular culture and music forever. From their first studio contract in 1962 until 1970, the Beatles lineup consisted of John Lennon, Paul McCartney, George Harrison and Ringo Starr.  Paul and Ringo are still alive and active. 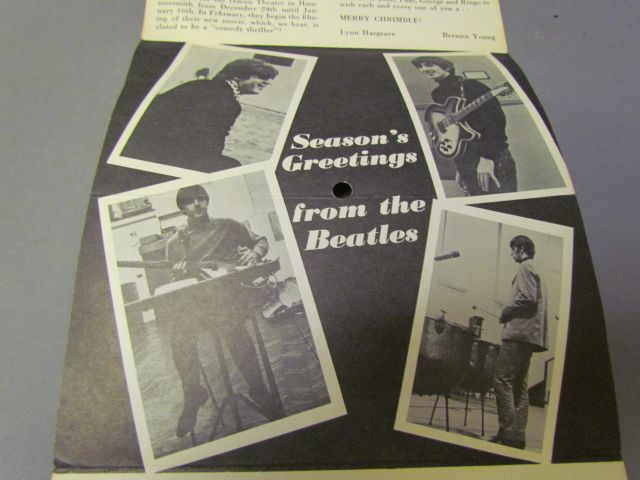 Our current auction offers a trip down memory lane that begins with a few early pieces like the 1964 Beatles Fan Club Season’s Greetings, 45 vinyl records complete with covers that allow you to watch them change over time.

What can we take away from their story? 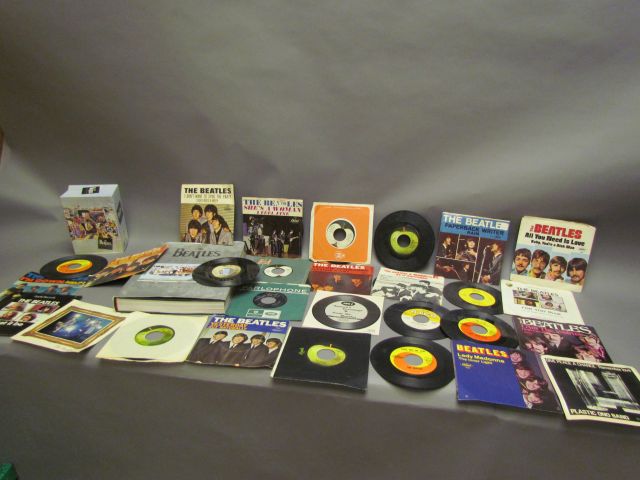 They started out as the Blackjacks then they called themselves the Quarrymen and played wherever they got a chance. Settling on band members was a challenge. They also called themselves Johnny and the Moondogs for a very brief time which failed. Stuart Sutcliffe the original bass guitarist came up with the name Beatals, a play on Buddy Holly’s Crickets which also didn’t last. The band members went on their own ways for a while. They played under The Silver Beats and Silver Beatles before finally settling down with just The Beatles. All this time, a good 7 years, the band kept doing their thing before they tasted big success starting from 1963. They faced challenges but they believed in their music and practiced their craft.

They didn’t give up!

Enjoy their Anthology in DVD and Hardback Book and their music. We Love You Yeah Yeah Yeah!
Also, let us know if you know of anyone who would like to sell items of value...  We would be happy to help!
Happy Bidding!
Liz


Those following the Longaberger Basket Company know that when founder David
Longaberger died, a big part of the Company’s momentum died with him.  The economic downturns and lack of clear vision from the leadership as well as huge turnovers at the top, made it difficult for everyone. After years of retrenchment, a takeover by a Texas company and more than enough lawsuits, it seems Longaberger is making a comeback through its roots.

On October 9th, 2017 The Dresden Times Recorder announced that The Longaberger Company will be moving back to Dresden in the coming months and “those in the village are happy to have them return” .

"Given the local economy this is wonderful news and will sure help revitalize the village," Mayor Dave Mathew said. "We look forward to partnering with Longaberger in this initiative to bringing many wonderful events back to the center of everyone's favorite hometown."
John Rochon, Jr., chief executive officer of Dallas-based JRJR Networks, the company that owns the Longaberger Company, told consultants the move is just the beginning of many wonderful things about to happen with in the company. 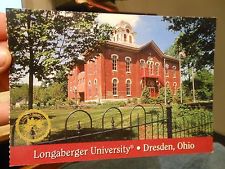 "We will be occupying the old patio shops on Main Street again," Baker said. "You'll once again be able to make a basket on Main Street, explore unique shops and stop in for a tour of Longaberger University, where the home office will be located.” Now that is great news! 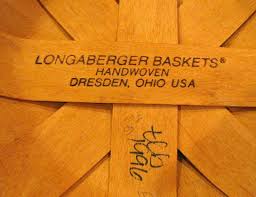 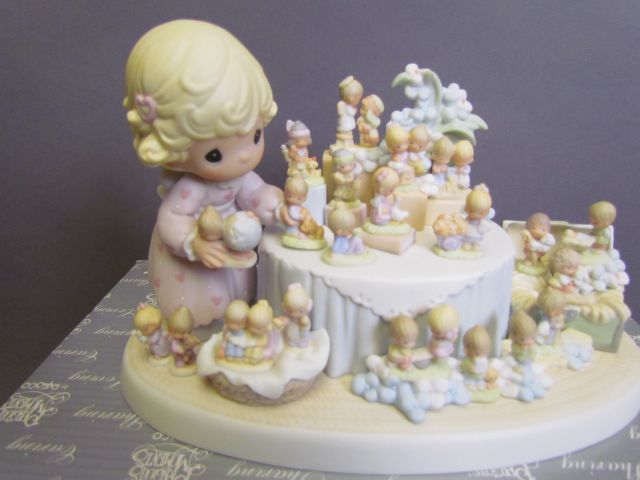 More than three decades ago, Precious Moments creator, Sam Butcher, began drawing the endearing teardrop eyed children he called "Precious Moments," as gifts for family and friends. Today, Precious Moments is among the most recognized art in the world sharing messages of loving, caring and sharing with collectors around the world.

Here is a picture of Sam standing in front of a mural that he painted at the Precious Moments Chapel in Carthage, Missouri. They have free tours. 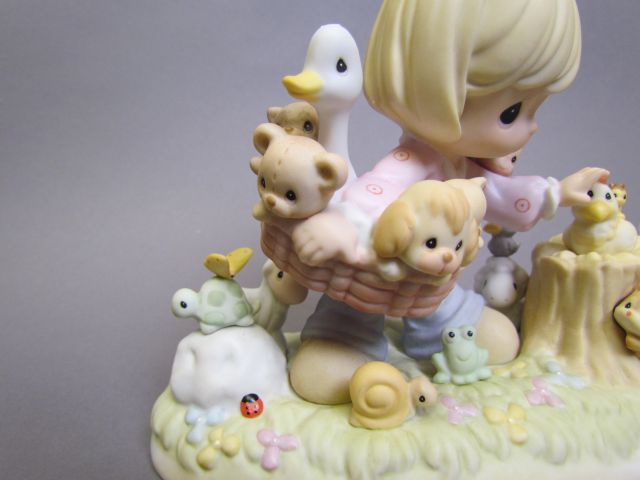 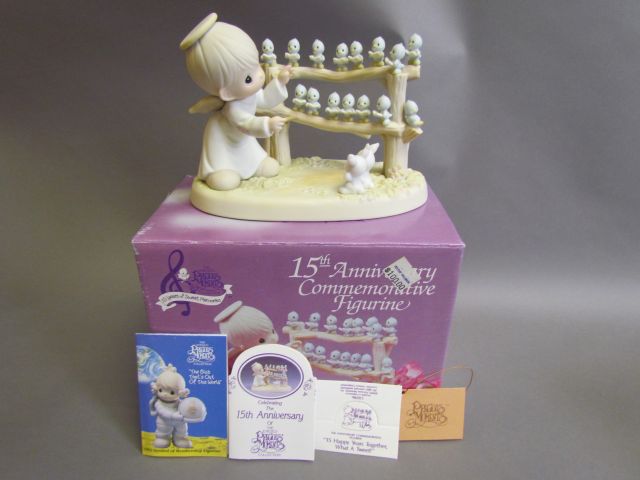 Every Precious Moments figurine created after 1981 has a marking on the bottom that indicates its production year. Many were Christian symbols, the completed list can be found here. 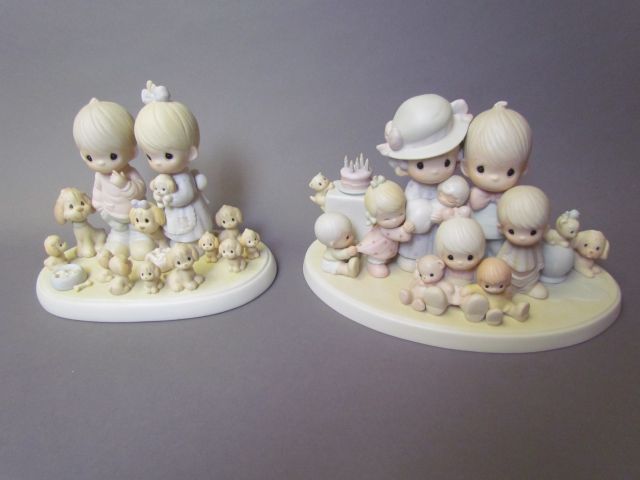 Our current auction offers many Collector Club Figurines that were not available to the general public when they were first released. They still represent Precious Moments today. We know you will be touched by their beauty, craftsmanship and their sweet messages of encouragement and faith.