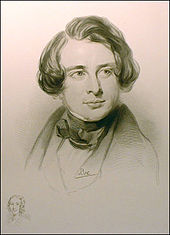 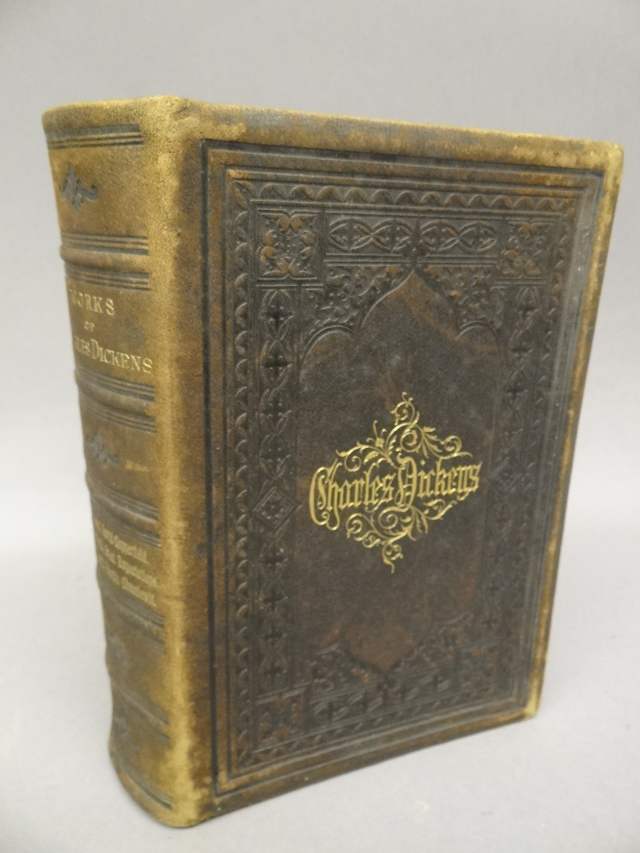 It’s been 202 years since the birth of Charles Dickens, possibly the greatest writer of the Victorian era, and this week’s auction at aypToday.com has the fan gear and some of his works in item 146 to show his art lives on!  Which is your favorite of his works? 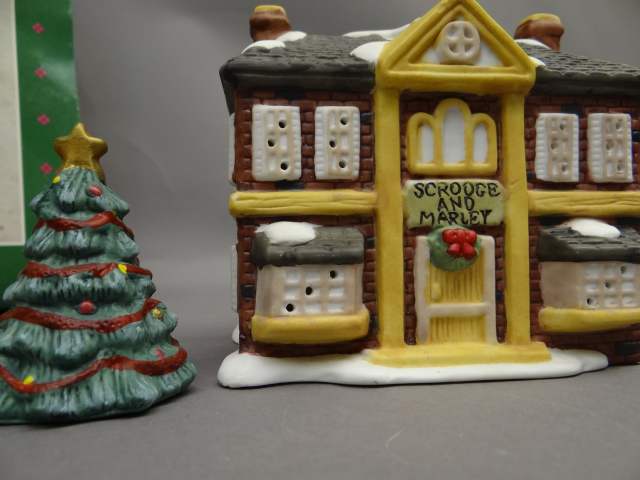 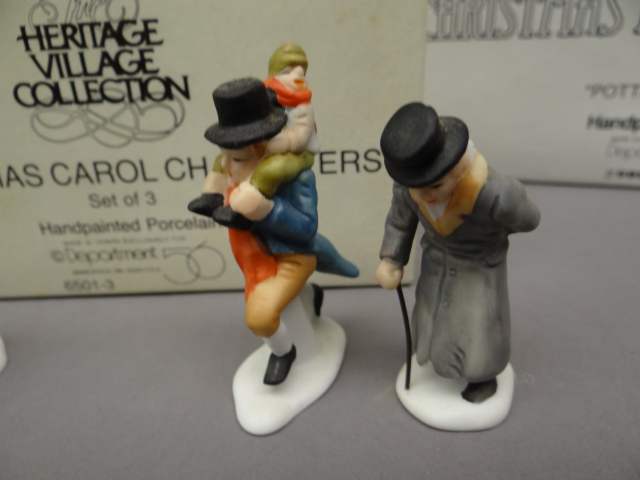 Is it A Christmas Carol?  Thanks to this work, English dictionaries now have the noun, “Scrooge,” to describe a miserly person.  In the story, when the Ghost of Christmas Past (see item 115) meets with Scrooge (item 82), the Ghost reminds Scrooge of the good times he spent as a youth with the Fezziwegs (item 81) in their Warehouse (item 69).  With the Ghost of Christmas Yet to Come (item 116), Scrooge looks into the Cratchits’ cottage (item 69) and sees Tiny Tim (item 82)’s place at the table is vacant.  This moves Scrooge to buy the large Christmas goose (item 82) for the family and pronounce that famous line, “I will honor Christmas in my heart and try to keep it all the year.” 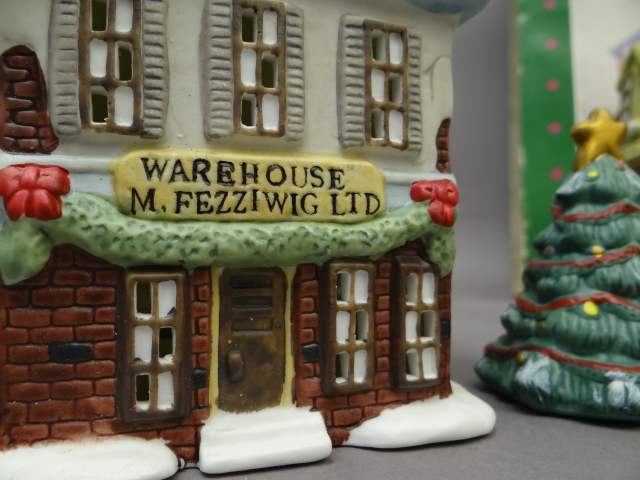 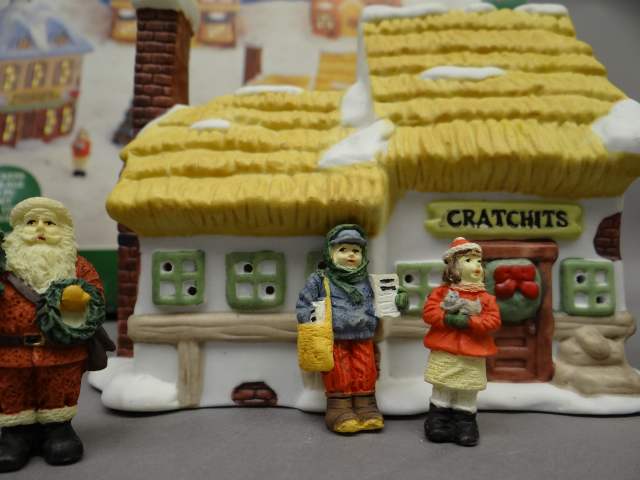 But my favorite Dickens’ hero is the dashing Nicholas Nickleby!  Maybe you’ve seen a movie adaptation?  If you’re a huge fan like I am, item 85 has you covered--from Nicholas’ time at Wackford Squeers Boarding School, to representations of the characters, to his final triumph of having his own cottage! 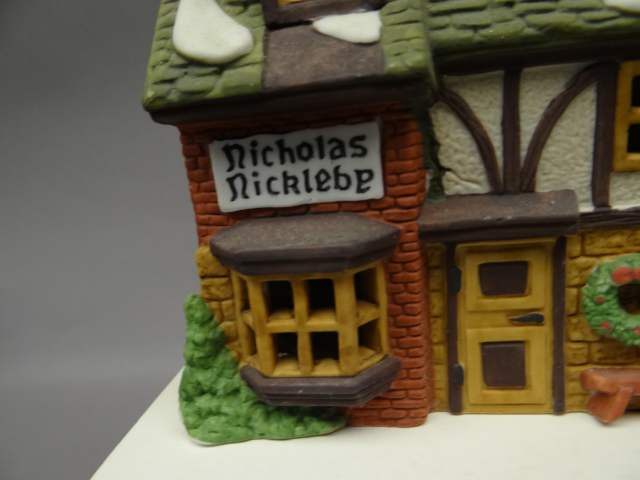 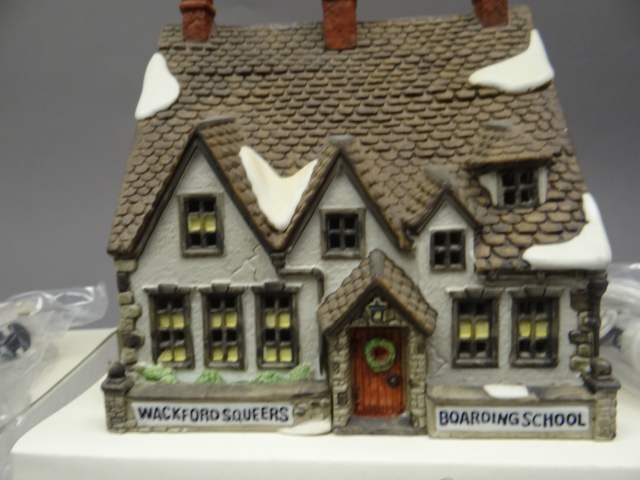 Before publishing Nicholas Nickleby, Dickens created Oliver Twist (see item 146 for your own copy) and its villain--Fagin (whose hide-a-way is featured in item 80).  If you start your own village scene, be sure to distribute the three Constables (also in item 80) throughout your village to keep it safe from Dickens’ villains and pickpockets like Oliver Twist! 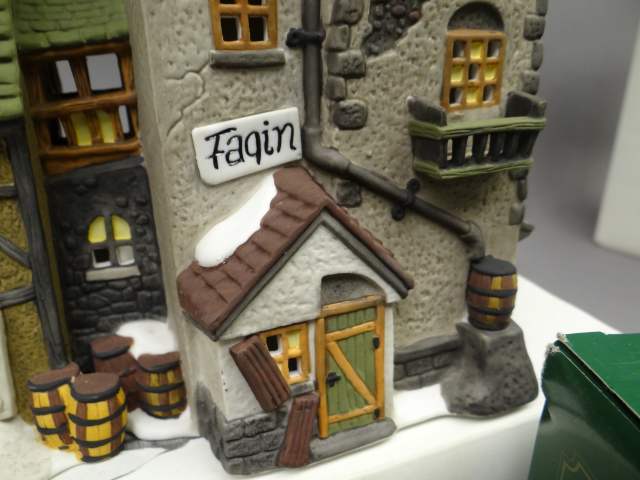 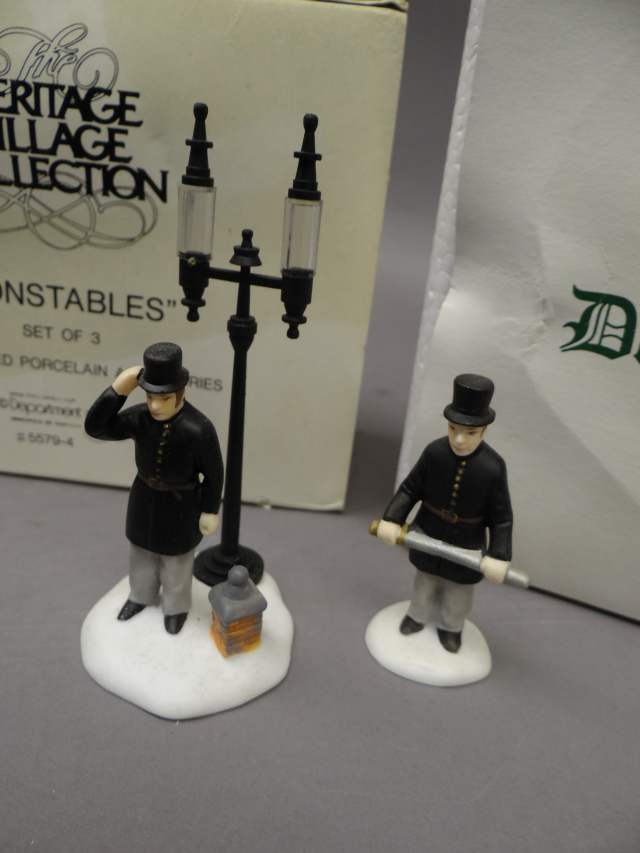 Sadly, Charles Dickens’ own life resembled that of many of his disadvantaged protagonists.  At the age of 12, when his family moved into debtors’ prison, he left school and worked in poor conditions.  Fortunately, later in life, his writing allowed him to buy the home he longed to have as a child, Gad’s Hill Place (item 70), and gave him an opportunity to travel.  In fact, he did a great deal of traveling, as fans paid to hear him read his works.  When traveling in Britain, he might have stayed in inns like the Pied Bull Inn (item 94), Dedlock Arms (items 70, 71, 101), Sir John Falstaff Inn (items 81, 94), or The Crown & Cricket Inn (item 71). 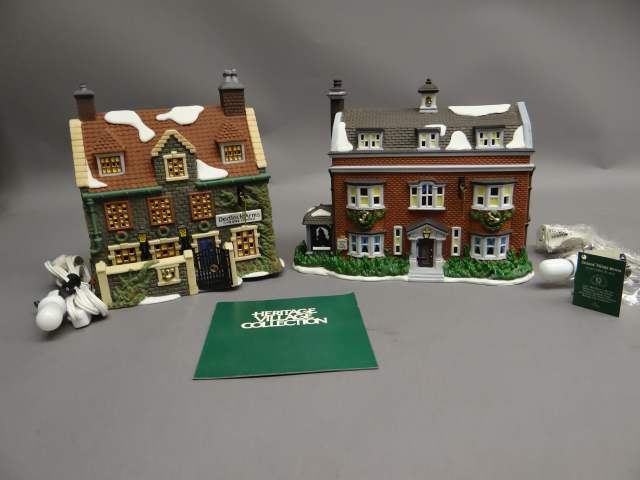 
Perhaps, when he traveled north from London, he took the Flying Scotsman train (like item 100) which has been running since 1862.  One train ride he took almost cost him his life; in 1865, all the first class carriages of his train went off a bridge--except his.  During this tragedy, he rescued some and comforted others in their last minutes of life.  However, the exhaustion he experienced from intense traveling and working during the last years of his life probably cut his life short; he died at age 58, in 1870.  With his memories of a simple beginning, he had asked to be buried in a private, inexpensive manner (I’m thinking churches like those in the Dickens’ Series: Knottinghill Church (item 101) and Old Michael Church (item 82)); however, he was buried in the Poets’ Corner of Westminster Abbey. 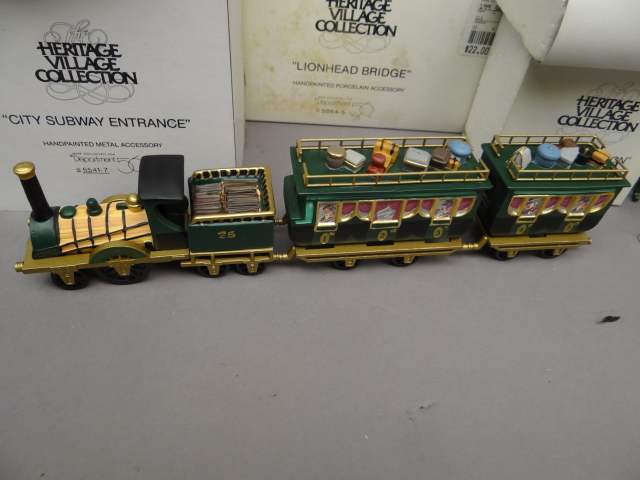 He is remembered as having written such excellent works as Great Expectations (with beloved Pip and cold Estella), David Copperfield (which was quite autobiographical), and A Tale of Two Cities (the best selling novel of all time), among others (see item 146).  So what’s your favorite novel of his?

JFK "A Man For The 60s" Campaign Button Memories


For some of us like me--too young to have witnessed the chill of the Cold War or the thrill of the Space Race, we ask our parents and or grandparents, “What was it like when JFK was president?” and “Do you remember the day he died, November 22, 1963?”  So, Dear Reader, I ask you, “What did John F. Kennedy’s presidency mean to you?”  and “On the fiftieth anniversary of his death, what does his legacy mean?” 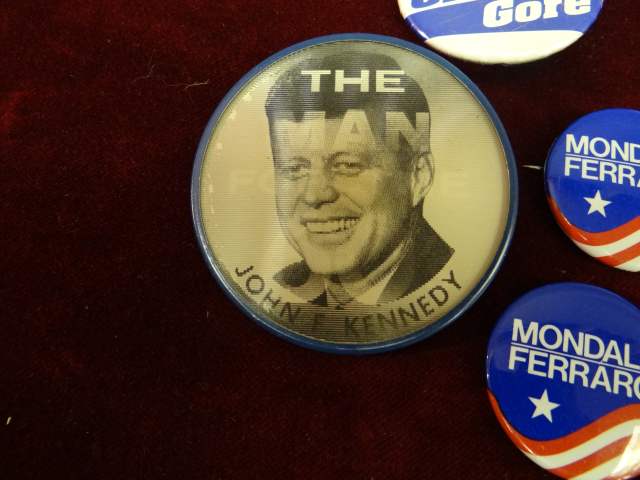 At AYPToday, we have an original Presidential campaign button of his run in 1960 (see Item 36).


Since last November was the 50th anniversary of his passing, I think it’s fitting to pause and remember him.


From a large Irish family already in politics, “Jack” was born in Massachusetts to businessman and politician Joe Kennedy, Sr. and philanthropist Rose Fitzgerald.  In his high school yearbook, he had been chosen, “Most Likely To Succeed” in spite of (or maybe because of shenanigans and pranks at school.  Despite bouts of hospitalization, he traveled widely with his family--including listening in the British House of Commons in September 3, 1939 to speeches concerning their declaration of war on Germany.  His Harvard undergraduate honors thesis submitted the next year eventually became a bestseller, Why England Slept.  In fact, JFK is the only president to have won a Pulitzer Prize.


After being disqualified for the Army due to his health, he joined the Navy, served in WWII, and earned several medals for heroism (I did not know this; maybe, you did).  Soon elected a congressman and then a senator, he set his sights on the presidency and ran in 1960.  At the Democratic Convention of 1960, he gave his “New Frontier” speech saying, “we stand today on the edge of a New Frontier.  [...]  But the New Frontier of which I speak is not a set of promises—it is a set of challenges.”  In the Democratic Primary, he defeated Hubert Humphrey (who later became Vice President under Lyndon B. Johnson).  Agreeing to be on JFK’s ticket, Lyndon B. Johnson ran as Vice President.


After JFK displayed his cool confidence during the first televised U.S. presidential debates in U.S. history, he defeated Vice President Richard Nixon in one of the closest elections in U.S. history in terms of percentage of votes (49.7% to 49.5%).


At the time of his presidential election, JFK, at age 43, was the youngest president to be elected, and he is still the only Catholic to be elected president.  At his inauguration, he uttered the words which still make us reflect today, “And so, my fellow Americans: ask not what your country can do for you, ask what you can do for your country.” 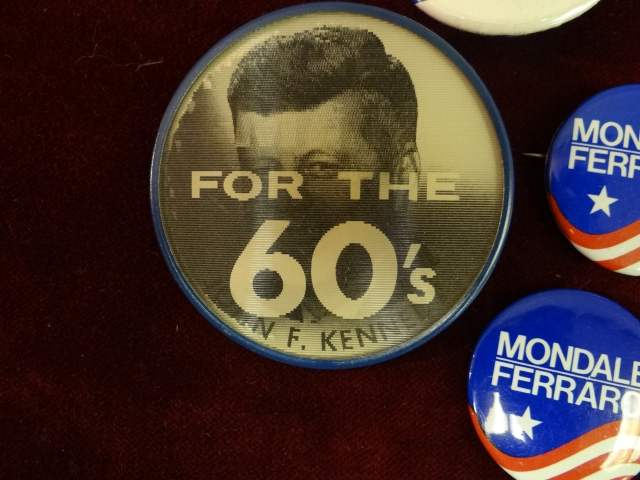 Made by VariVue, this button’s hologram shows "The Man for the 60's" in white lettering on a black ground as well as his picture. 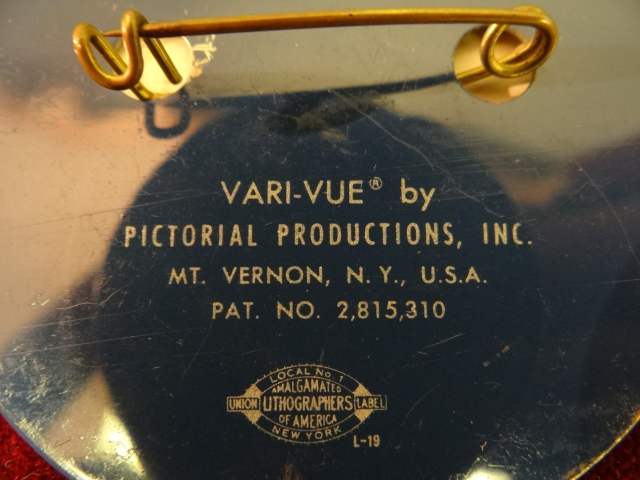 VariVue buttons were used in many political campaigns in the United States during this time.  Below is a picture of how their factory looked in 1962, just two years after this button was introduced in the 1960 presidential election.

It is amazing what a mark John F. Kennedy made on the American psyche during his short life.  Because of my love of science (see item 79), my favorite quote from his presidency is, “I believe that this nation should commit itself to achieving the goal, before this decade is out, of landing a man on the Moon and returning him safely to the Earth.”  What’s your favorite quote of his?


Happy Bidding!
Adrienne
www.ayptoday.com
Posted by Ayp Today at 5:47 AM No comments:

It's Fall y'all, Come Outside! 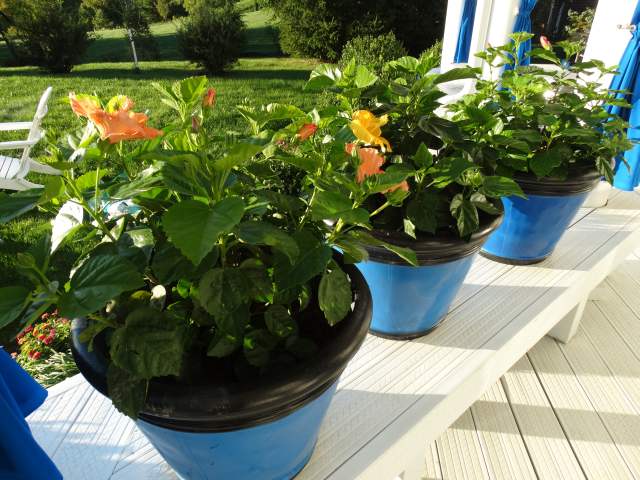 What better way to enjoy this wonderful Fall Season than to Come Outside!


Our current auction gives you more than one reason with
the outdoor furniture featured here. 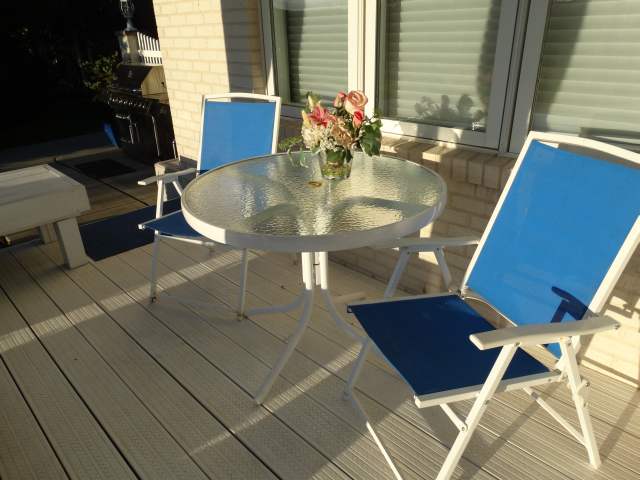 There are many reasons to have a Staycation in your own back yard
as you can create your own outdoor oasis.  With just a few bids
comfortable lounging can be yours. 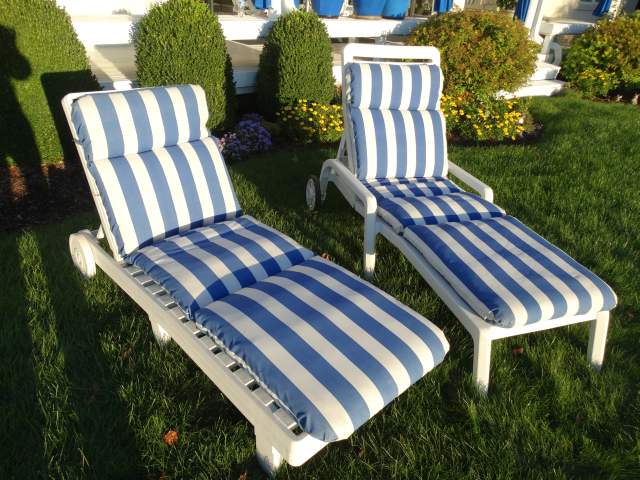 This quality outdoor furniture allows you to relax in style.  Besides looking good and being weather resistant much of it folds flat for easy storage. 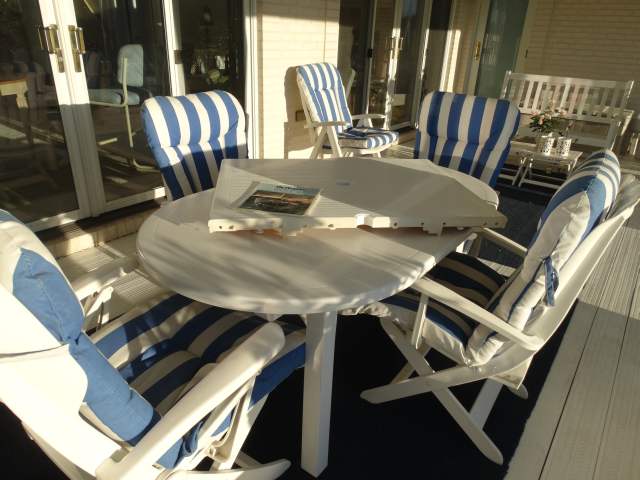 Your yard or patio can be instantly updated with these
wonderful Planters that are already
looking great with live Hibiscus.